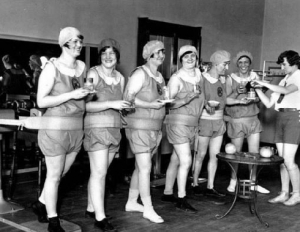 Forbes did a great article on the Top 10 Most Common Fitness Myths this month.  Checkout the article, and see if you have fallen for some of these falsehoods.

Every January seems the same. Suddenly the once barren streets are full of joggers. Grocery store carts are stacked tall with fresh fruits and vegetables. Americans are resolved again to get fit, lose weight and be healthier.

To help us mere mortals get the most out of our workouts, Wiedenbach penned 101 Fitness Myths to correct the widespread misconceptions. Here are the top 10 most common that may trip you up in the New Year.

Exercise can erase my bad eating habits.
This one is pervasive and unfortunately a myth. “You can’t out-exercise a crappy diet,” Wiedenbach says. “Your eating has to be in check. About 80% of what you look like is based on diet.” It’s a calorie game, and he says people often overestimate the amount of food they burn in an hour-long session. He suggests sitting down, doing the math, and figuring out your weight-loss goals.

I can just tone my muscles.
More often than he can count, Wiedenbach hears women say, “I just want to tone.” But he says it’s the wrong way to look at it. “You can only lose fat. Your muscles are already toned or you wouldn’t be able to move around. They’re just not visible because of the layer of fat covering them.” First and foremost, he advises fixing your diet. Then target the trouble areas, and lift weights at intense, about 85%, muscle capacity.

Women need different exercises than men.
Despite what the relationship books say, when it comes to fitness, men and women are from the same planet, says Wiedenbach. Both sexes have the same body structure but different hormonal make-ups, he says, which may mean a difference in muscle strength but does not mean they should work out any differently. “Men tend to focus on abs, chest and arms, and women tend to focus on gluts and legs,” he notes. “They’re each forgetting one half of their bodies.”

Women should lift lower weights and do higher repetitions than men.
This myth is particularly common because women worry that lifting weights will bulk them up. However, Wiedenbach says, “Without chemical assistance, women cannot achieve extraordinary muscle growth.” Because women’s testosterone is lower, they likely won’t be able to lift as much weight as men, he says, but the typical three-pound lady dumbbells won’t work because the resistance is too low to create change in the muscle. He recommends everyone doing six to eight repetitions with a weight that challenges them.

You should always stretch before exercising.
“Stretching is something many people just do because they feel they should or someone told them to,” Wiedenbach says. The conventional wisdom is that stretching elongates the muscle and helps prevent injury. Conversely, he says that stretching before a workout will weaken the muscle by 30%, and the reduced tension may increase the risk of injury. His advice: Do warm up by walking before cardio or doing light weights before intense training, and do stretch after a workout.

I can reduce fat in one area.
“I am sorry, but spot reduction does not work,” says Wiedenbach. It all comes down to that pesky layer of fat obscuring those perfectly toned muscles. No matter how many crunches they do, someone with 20% body fat will never have abs like someone with 8% body fat, he says. To lose weight quickly, you’ll need to burn as much fuel as you can with intense exercises like squats, dips, pull downs, dead lifts and shoulder presses while following a strict diet.

I’ll burn only fat at my target heart rate.
Wiedenbach says that while cardio equipment often features graphs listing target heart rates for fat burning, the body is too complex for them to be accurate. “The only time when you burn fats exclusively is when you are asleep,” he says, and then it’s not all that much considering that, well, you’re sleeping. He believes interval training, a mix of low and high intensity, will produce the best results.

I’ll burn more fat on an empty stomach.
While this statement might technically be true—in the morning the body is deprived of nutrients so will tap fat stores–Wiedenbach says it is the wrong approach. “Working out on an empty stomach burns more muscle, which defeats the purpose of any fat-loss diet. I also believe that working out in a fasting state is sub-optimal, since the lack of nutrients will not allow for peak performance.”

Shakes are great for weight loss.
Nope, this won’t work, Wiedenbach confirms. He says most are a mix of cheap protein, vitamins, sugar and coloring agents. It’s not that they’re inherently bad for you, but that they won’t keep you full. Whole foods have more fiber and take up more stomach volume, which keeps you feeling satisfied. They also require more digestive work, so use more energy and keep the metabolism up, he says. But if you just have to drink them, he suggests looking for high-end whey protein and adding some fats like nuts or oil to increase satiety.

Eat only egg whites and not the yolks.
Egg yolks have long had a bum rap, supposedly being terrible for your cholesterol. However, Wiedenbach says that eggs won’t affect your cholesterol balance unless they’re fried in butter and served with bacon. In fact, one study by the University of Connecticut found that the fat in the yolks helped to reduce LDL, or the bad cholesterol. “The yolk contains most of the vitamins and minerals in the egg, plus half the protein,” he says. “Since an egg white-only breakfast is nearly fat free, it will cause a significant insulin spike and promote hunger cravings as well as energy swings later in the day.”