Should You Take Creatine?

Creatine is a compound that is naturally produced in the body and is also found in some foods, such as red meat and seafood. It is also available as a dietary supplement. Creatine is commonly used by athletes and bodybuilders to improve athletic performance and increase muscle mass.

While the exact mechanism by which creatine enhances muscle growth is not fully understood, it is thought to work by increasing the availability of energy in muscle cells, which can support the production of new muscle proteins and the growth of muscle fibers.

It is important to note that the benefits of creatine supplementation may vary depending on the individual. Some people may experience greater benefits than others, and the effects may be more pronounced in people who are not regularly consuming foods that are rich in creatine.

In terms of safety, creatine is generally considered to be safe when taken at recommended dosages. However, it is always a good idea to talk to a healthcare professional before starting any supplement regimen, as certain groups of people, such as those with kidney problems or diabetes, may need to be cautious when using creatine.

For more science and studies, you can checkout this link to a study by the National Library of Medicine:  https://www.ncbi.nlm.nih.gov/pmc/articles/PMC3407788/ 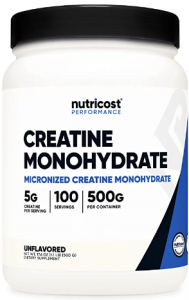 Creatine monohydrate is a simple and inexpensive form of creatine that is readily absorbed by the body. It is typically sold as a powder that can be mixed into water or other beverages and taken as a supplement.

In general, it is recommended to stick with creatine monohydrate, as it has a long history of use and has been extensively studied. If you are considering using a different form of creatine, it is a good idea to speak with a healthcare professional or a sports nutritionist to determine whether it is appropriate for you and to get guidance on proper usage.

At ESL, we prefer monohydrate ourselves, as its relatively inexpensive to purchase, and widely available. There are a number of low-cost versions available.  We’ve been using this version, purchased off Amazon, has worked well for many years. The Nutricost product is low-cost to buy, and offers enough to last for several months with regular use.

In conclusion, creatine appears to be an effective supplement for increasing muscle mass and strength when combined with resistance training. While it is generally considered safe, it is always a good idea to consult with a healthcare professional before starting any supplement regimen.